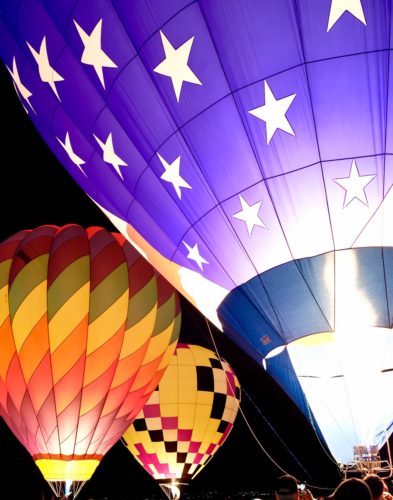 As I look back on a year of full time travel, I realize I have seen and done more in just a year than I have a lifetime of one week vacations! I mainly vacationed in the Caribbean and have had my share of vacations in Florida when I was younger. Now we are traveling in an Airstream and are able to see things we probably wouldn’t have gotten to by flight and destination planning. For example, would we have traveled to Texas to see Palo Duro Canyon? I highly doubt that, but because it was in an area that we traveled through, we went and loved it! The second largest canyon in the US next to Grand! Who knew?

I chose the picture from the Balloon Fiesta in Albuquerque because it was our first major event. It was fascinating to see so many balloon shapes in the sky at once! More information on the Balloon Fiesta will come in a separate blog post – just in case you are interested in attending!

We kicked off our full time travels at Normandy Farms outside of Foxboro where the New England Patriots play. We went to the Patriots Hall of Fame at the start of football season. It’s funny how you live in New England your whole life but don’t take advantage of a lot in the area.

We attended the Hershey PA RV show. We weren’t looking for a new RV, but we did manage to buy our flag pole there. It was just ok. If you are looking for a recreational vehicle, it is nice to see so much represented in one area where you can tour them especially if you are trying to figure out exactly what you want. It’s also nice to see the new technology and designs that come out every year.

We made our way across the US and stayed overnight a lot along the way. Our goal was to reach Smith Center Kansas, in the middle of nowhere, to have our fifth wheel slides worked on.

We continued on to Colorado Springs for what ended up being 6 days. We visited Garden of the Gods, and Royal Gorge Bridge and Park.

From there we went to Angel Fire NM for 8 nights. We really needed a break from packing up and moving all the time. Angel Fire RV Resort was a beautiful resort. I will be posting campground reviews, the good, the bad, the ugly!

Next was the Albuquerque International Balloon Fiesta. Such a fun event and a first opportunity to get to know neighbors and socialize over coffee in back of our rigs while we watched the balloons fly! While in Albuquerque we visited Sandia Peak and Petroglyph National Monument.

Continuing on our journey we traveled into Amarillo Texas. There we would discover local attractions like The Big Texan Restaurant, Cadillac Ranch on Route 66, and Palo Duro Canyon, the second largest canyon in the US next to the Grand Canyon.

On to Nomadfest. We signed up for a four night rally style park to hang out with You Tubers and other fellow nomads to watch the premier of the movie RV Nomads.

We then traveled to Oklahoma City and went to the Oklahoma City Bombing Memorial and Museum. This was unbelievable…very well done and so moving.

Waco Texas was next with a visit to the Magnolia Silos. Joanna Gaines has such great taste, but I was in a tiny space and couldn’t decorate a house as much as I wanted to! Save a lot of money there! 😂

Heading towards California we traveled to Sedona AZ and stopped in Winslow AZ to see the Eagle’s “Standin’ on the Corner. We went to Oatman, AZ and saw the wild burroughs in an old western town, we went to Laughlin Nevada and Bullhead City where the Colorado River ran through and the dogs got to swim there. We went to Lake Havasu City in AZ where the London Bridge is. We will be back!

I then traveled to Apple Valley California in the “high Desert” in southern California close to San Bernardino. While working we managed to visit Joshua Tree National Park, Riverside and the Mission Inn, Laguna Beach, Julian for pie, Palm Desert, Big Bear Lake and Mountain.

After my work assignment I took a little more than a month off to visit Zion National Park, Snow Canyon State Park, Page Arizona.

Having to be on the east coast to return to renew my driver’s license, I took my next assignment in Fayetteville. While here we took in a Carolina ‘Canes hockey game, and they went to the playoffs this year, we walked with Lemrs at Duke, Raleigh Durham where the Durham Bulls play as featured in the movie “Bull Durham”. We went to Topsail Beach, North Myrtle Beach, Pinehurst where the PGA tournament is, Seymour Johnson Airshow. Just before arriving to our 3 month destination in Fayetteville, we also visited and stayed in Asheville and the Biltmore Estate.

After my assignment in June we needed to make our way back to NH to register the truck and Airstream, inspection and driver’s license renewal. We stopped and stayed at an Army Corps of Engineers park (beautiful) in Virginia and Shenandoah River State Park where we visited Shenandoah National Park.

We spent almost a week in Cooperstown NY before returning to NH. We went to the Hall of Fame, some breweries, a lavender farm and a historic site with original turn of the century homes and farms. We really liked that area, it’s a beautiful countryside.

We spent two months in Hampton and Maine bouncing around, getting some stuff done but not as much as I would have liked. We then headed to Southwest harbor where we workamped (yes it’s a word generated by the full time community)😂.

We worked at Bass Harbor Campground for two months and felt lucky we were able to explore Acadia National Park more in depth than just a week here or there. We each worked 20 hours a week. I was in the office mostly and Mike worked outside in is little golf cart 🤣 making repairs and performing maintenance.

That is pretty much a year and we saw a lot! Road trips are definitely the best way to see America. Sometimes it’s the small things. We will take in sites like Buddy Holly crash site, Flight 93 memorial, Field of Dreams in Iowa, etc. These places I’m sure we wouldn’t access by flight. We enjoy seeing these things and learning history. I always personally feel like I am on vacation even though I am working 40 hours a week, three months at a time. It’s a new area with new things to explore.

We’d like to stay at more rallies moving forward, meeting people and being social. Most likely we will find a group to caravan with over to Alaska.

We also learned that full-time RV’ing isn’t so cost effective if you are not careful. It can easily be more expensive than a stick and brick existence. This year we aim to be better at this – another blog post in the making.

I’ve got some catching up to do to recount past experiences in this blog thing which I know nothing about so stay tuned!